A must-try Goan delicacy if you’re headed to Goa, India, for a holiday!

“To retain respect for sausages and laws, one must not watch them in the making.” – Otto von Bismarck

The Fact: Sausages were called bangers during the Second World War because they contained so much water that they exploded when fried.
The Inspiration: This dish is born of a special sausage that is home to Goa, India, a tourist destination famous for the glorious sun, the myriad beaches, and the lip-smacking Konkani seafood. I’m not sure of the availability of this sausage outside the state, but I’m sure that getting hold of it would be nothing less than an Olympic feat.
Goan chouriço or chorizo are spicy, flavorful, deep red pork sausage links made from pork, vinegar, chili, garlic, ginger, cumin, turmeric and other spices that are stuffed into chitterlings (pigs intestines) and sold in dry or wet forms. Goan chouriço is a traditional food item that has built its way into the “authentic” Goan cuisine lineup, thanks to the 451 years of Portuguese rule.Fortunately, I live in a city that’s not too far from Goa. I also have friends and family visiting the place every second month. So the specialty product is not as much a “specialty” as it is an ordinary ingredient in my kitchen.This dish is my quick fix almost once every month. The recipe’s been handed down from my mother and mother in law, and their mothers, and so on. Besides being a quick fix, it’s also one of Ally’s favourites; him being a true “not-born-but-brought-up-in-Goa” kinda Goan. 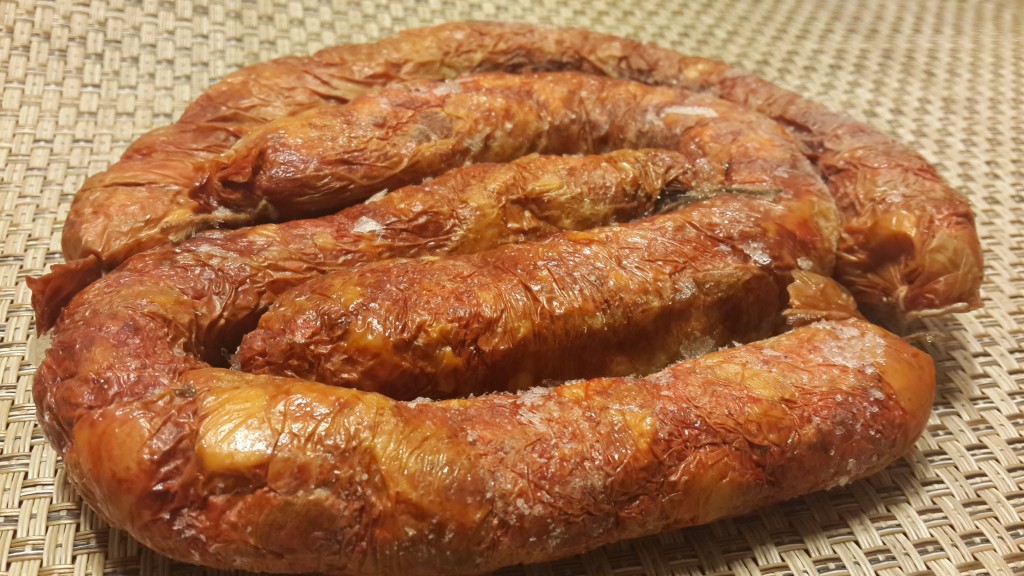 The same dish when cooked along with rice forms a more substantial ‘Goan chouriço pulav’ meal.

I would recommend a quick jog or some form of workout the next day 🙂 Bon appétit!